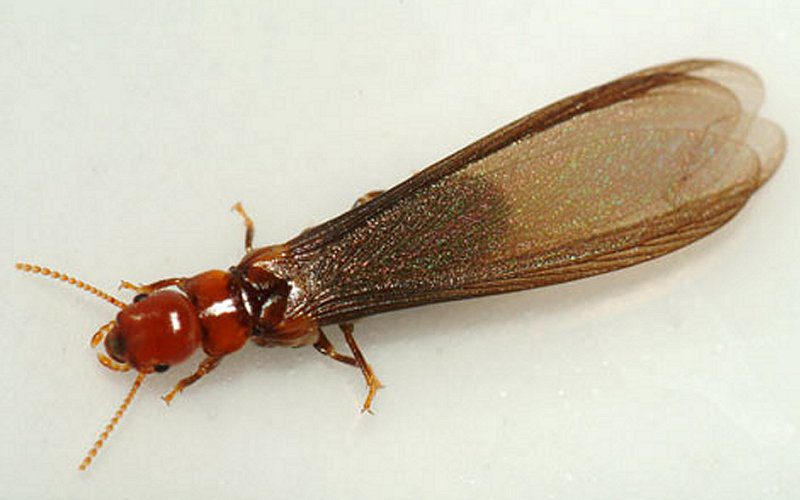 Sometimes called the ‘rotten wood’ termite, dampwood termites are a species of the Termopsidae family. They are found where there is a high moisture content and wood decay, often in fallen logs and tree stumps in forests but also in the decaying wood found in buildings, fences, or other structures.

The dampwood termite is larger in size than the drywood termite and the subterranean termite, but generally forms smaller colonies. Dampwood termites have large heads with mandibles on the front.

Physical characteristics include the following:

There is no worker caste in this species, so nymphs do the work in the colony.

Specialised organisms in the dampwood termites’ digestive system allow them to digest wood.

As with other termites, dampwood termites undergo incomplete metamorphosis, and the nymphs show a lot of similarities to the adult in appearance, gradually molting to assume its fully adult appearance.

The life cycle can be divided into 3 stages; egg, nymph, and adult. The first two stages last approximately a month each and the adult life span can be from one to several years. Nymphs usually require the assistance of worker termites to molt; however, dampwood termites can molt without assistance.

A pair of alates (winged termites) starts a new colony of dampwood termites. They make a chamber within a suitable piece of wood and produce eggs there. In general, colonies are small but can become large if conditions are conducive.

In order to survive, these termites need high degrees of humidity and regular contact with water.

Dampwood termites typically do not nest in soil but look for wood with a high moisture content in which to create their habitat, often creating their nest in partially-buried wood, such as stumps of trees or fallen branches.

In contrast to the drywood termite, they are associated with decaying wood and may be found in rotting planks and around leaky showers, baths, roofs, and in areas without sufficient ventilation.

Old gutters filled with leaves can lead to an accumulation of moisture in wall cavities, which is also an attractive environment for the dampwood termite.

To remain hidden and preserve humidity, they cover up entry holes with their own faeces, sealing the galleries where they live from outside air. They do not usually have contact with the soil and do not make tunnels, in contrast with subterranean termites.

The cellulose found in plants is the basic foodstuff of all termite species. Dampwood termites feed on decaying wood and other cellulose materials, digested through the support of symbiotic protozoa and bacteria. They may find their food sources in furniture and elsewhere within the home, in dying trees, and in poles and other structures with a high moisture content. They may also eat injured colony members and other termites within the same habitat.

Compared to drywood termites, dampwood termites generally do not cause such extensive damage to man-made structures. However, dampwood termites can weaken the structures of houses by hollowing out support beams, which can require costly repairs. Their activity is difficult to identify until the effects are already severe, as the termites themselves remain hidden. Dampwood termites often eat across the grain and wood that they have already damaged usually looks clean and smooth inside.

Most insurance plans don’t cover this type of damage, so a dampwood termite infestation can represent a significant economic threat.

Identifying and solving any water issues in and around the home and other structures is a key element of dampwood termite control. Water-damaged wood or wood that rests directly on the ground can attract dampwood termites.

Signs of infestation can be observed and identified, such as wings that have been shed, ejected wood pellets, a ‘velvety’ appearance of wood as if finely sandpapered, piles of fecal pellets that are coloured according to the wood being eaten, are elongated and have rounded ends, differing from the flattened surfaces of drywood termite pellets.

To control the problem, it is necessary to reduce moisture in infested areas. This can be done by repairing any leaking plumbing, increasing ventilation, checking that drains are functioning, and adjusting structures so that contact of water with wood and soil is minimised.