A long overdue pest inspection has thankfully saved a Camp Hill resident’s home from potentially financially crippling damage to her house. A termites nest, the size of a bedroom door, was located behind her shower, in the bathroom. The older style property was built into a hill, and the homeowner reported to us that she had noticed paint bubbling and lifting in various parts of the house.

What concerned us most is that she hadn’t had a termite inspection carried out in more than five years. 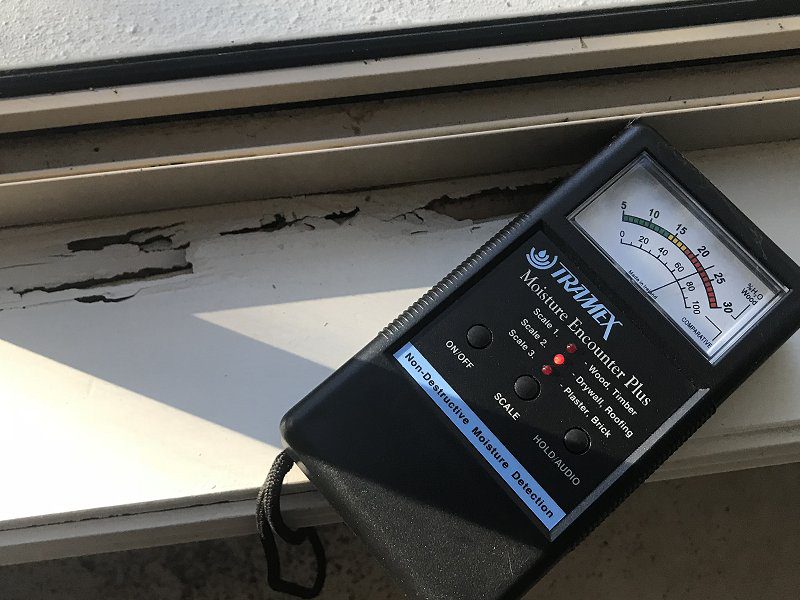 When we visited the property, the homeowner pointed out an area behind the shower where she had noticed the paint bubbling, and a large brown stain forming on the wall. In this case, she’d simply assumed the issue might have been caused by a leak in the shower but thought she’d rule out termites as a precaution.

Thankfully, she listened to our advice during our initial phone call, and had us out to perform a termite inspection. In this case, there was a water leak, which had created an ideal water source for a species of termites called coptotermes, also known as the “subterranean termite”. When they find a reliable food or water source, they’ll build a sub-nest, or bivouac. As the mud nest grows, it starts to seep through the plasterboard and creates blistering of the paint. She reported that the stain had grown from the small patch on the wall to chest-high within a matter of weeks.

To determine the cause, we used specialised equipment in order to assess the scope of the infestation, including the following tools:

We didn’t need to open up the wall and disturb them because the thermal camera had shown us on the screen precisely the size of the nest inside the wall. Once we had confirmed the scope and location of the termite activity, we injected Termidor into the wall through small incisions in the wall. We explained to the client that it was important not to disturb the nest until the treatment had remained in the space for 21 days.

Termidor is not designed to kill the termites instantly, it’s also not a repellant. It’s designed to be undetectable, but once exposed, the termites will spread the product back down underground throughout their entry point to the other termites in the colony.

The importance of a thorough termite inspection

What we knew from the inspection in this case, was that the termites had built a huge sub-nest backing onto the shower because of the constant source of water. The moisture had gone through the slab into the soil, which is where the termites were coming from. The homeowner felt confident that the infestation was localised, but our experience told us otherwise. It took some convincing, but eventually, the client agreed to having us perform a full inspection of the property.

When we inspected the exterior of the home, we found five termite entry points. They were coming up the slab edge into the house in multiple areas. The internal inspection revealed six other areas where termites had access. The termites weren’t just backing onto the bathroom. They were in all different areas of the house, and they were starting to really do some serious damage.

The internal damage was luckily only about six months old, so they hadn’t done any structural damage to the hardwood framing, but if left untreated it could have been extremely costly. We confirmed damage in many of the homes fittings like the door frames, window frames, and skirting boards. We estimated that in another six to 12 months, the termites would have eaten nearly the whole house.

The client couldn’t believe the extent of the potential damage, and thanked us for ‘saving her house’.

This is what we’d like homeowners to learn from this case:

Once the active termites in the bathroom had been killed off, we returned to check the area behind the shower wall, which revealed the nest was about the size of an average bedroom door. The space behind the shower and the wall membrane was solid with termite mud. From there, we waited 25 days from the initial treatment before we installed the perimeter barrier. Some companies do the perimeter termite barrier straight away, which does nothing but trap the termites inside the home. Its always important to have remove the termites from inside the home first, then implement a barrier.

Concerned about termites in your home?

Get in touch with us today and we’ll schedule a time to come out and perform an inspection. You never know, a few hundred dollars might be all it takes to prevent tens of thousands of dollars worth of damage. Don’t wait, call us today.