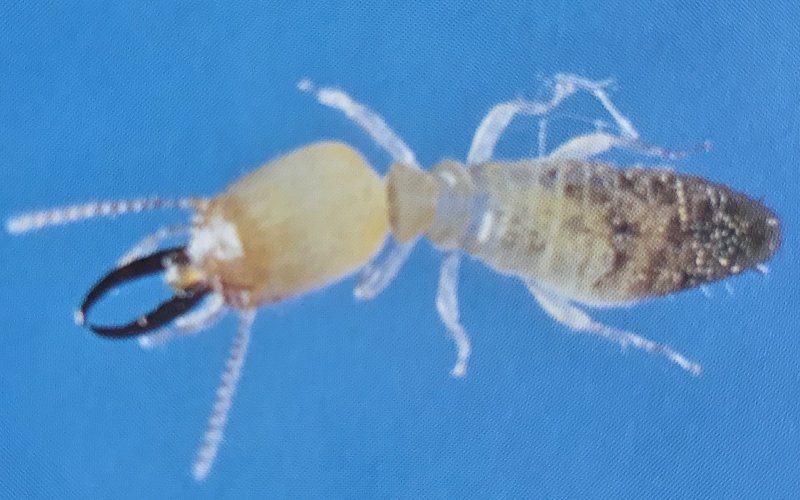 Termites are social insects, living in colonies. A caste system defines the roles of each individual in the colony. Queens and Kings initiate new colonies, caring and feeding the young until there are sufficient members of other castes to run the colony.

There is worker, reproductive and soldier castes for specialised jobs. The worker caste handles nest building and food gathering and feeding the reproductives and soldiers, nymphs tend to contribute to these tasks as well. Soldiers have one job, the defence of the colony.

The termite life cycle is characterised by a series of metamorphosis stages where they go from egg, to nymph and finally onto adult.  After hatching from the egg, a nymph will go through a series of between four and seven moults before reaching full maturity and becoming a worker, a solider or a winged reproductive.

Termites progress through the nymph stage over a period of two to three months which depends on the conditions within the colony largely dictated by food supply and climate.

There are four different castes of adult:

Within the nest, the queen and the king are the central caste of a termite nest.  Upon the formation of a new colony, the queen and king do the work of worker and soliders in feeding and caring for the young until there are sufficient numbers of these castes to take over those duties.

As the name implies, the workers are the termites in a colony that do the bulk of the work.  These blind, sterile and wingless termites are responsible for everything in the nest aside from breeding and defending the colony.  The workers are the termites that you will find on your property doing the damage to your wooden structures.  This cast will only venture outside their underground tunnels when searching for new sources of food or if the humidity in the tunnels is too high.

The soldier caste’s job is to simply defend the colony from natural predators such as ants.  The soldier termites are made up of both males and females, but their sex organs and gender characteristics have not developed.  Staying primarily within the nest itself or in the nearby tunnels, the soldiers use their fontanelle to discharge a natural secretion with acts a chemical repellent to enemies.

The reproductive class, which are slighty larger than soldiers and workers, are potential queens and kings and can also have wings which allows them to leave the next and create a new colony.  Colonisation usually happens in summer and the signal for the reproductives to leave is based on outside temperates and the overall health and condition inside the existing next.

This subterranean termite nests in timber on the ground, rotting wood, decking, poles, posts and fences, especially in decaying material. They commonly occur in small populations. They do not build mounds, but nests are often found next to the mounds of other species, leading to confusion, often with Coptoermes species. The main portion of their nest is underground, and they make mud tubes to access structures.

Workers and soldiers are sluggish and less aggressive in defending their colonies than other species. Found in south-east Queensland, New South Wales, Australian Capital Territory, Victoria and southern areas of South Australia and Western Australia.

The harvesters of food within the colony are the workers.  They consume wood and wood products to extract the cellulose.  The workers return to the next and excrete the digested cellulose for other castes to consume.

This subterranean termite is considered a minor structural pest. Damage can occur to your home usually detected by the homeowner quickly as they eat the softer timber usually door frames of skirting boards first and typically superficial.