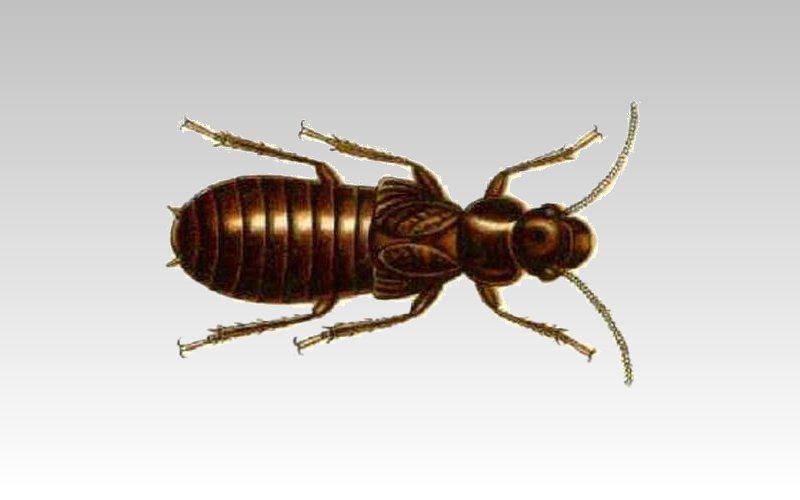 In October 2011 Danny Kelly from Pest Ex discovered a breed of “Super Termite” active on a Property during a routine termite inspection on the Gold Coast.

These termites called Mastotermes Darwiniensis, or the “Great Northern Termite”, and are generally 4 times the size and eat 4 times as much as any other termite and can be responsible for doing millions of dollars in damage in far northern Australia every year if left untreated.

The Mastotermes Darwiniensis are resistant to regular termite treatments and if an in-experienced technician treats these white ants, it can have little effect to them and they will continue to eat your house away.

Scientists who have been studying this breed of termite for 40 years can attest that a mature colony can eat oven 7 kilograms of wood a day. If left un-treated the can cause massive structural damage to your house in a relatively short time.

They were never thought to exist south of around Gladstone, until in October, Danyy from Pest Ex Pest Control discovered a colony, while doing a pre-purchase inspection on a Gold Coast Property. I have a feeling that person got a discount on that house. This is proof why you should get an experienced and well respected Termite Control Technician to do your inspections. The little bit more you pay is well worth it when they do their job properly. Just imagine if you were buying this house and the operator rushed the job and missed these…..which can, and has definitely happened in the past.

We’re being warned that a super termite capable of eating four times as much, four times as quickly as a normal termite, is on the march. It’s the world’s most destructive termite and now, like the cane toad, it’s spreading from the tropical north to set up large colonies further south. As Adam Marshall reports, experts fear the super termite is mutating to survive and thrive in colder conditions.

Danny Kelly: “They can do severe structural damage to houses really quickly.”

Chris Langley: “They can attack, not in their thousands, but in their millions.”

Adam Marshall: “They’re bigger, more ferocious and hungrier than any other termite on the planet and have started marching south along Australia’s eastern seaboard.”

Adam Marshall: “The Mastotermes Darwiniensis when he enters, or the Great Northern Termite, is responsible for millions of dollars in damage in far northern Australia every year. It’s three to four times the size of normal termites and is resistant to regular white ant treatments.”

Chris Langley: “Nobody wants super termites like these in their homes at any time and certainly not to the point where they might destroy their home within three months.”

Adam Marshall: “Forget looking for mud tunnels. The mastotermes build a termite superhighway as seen under this house. But the signs aren’t always so obvious. This is the bed where a grandmother was sleeping when the roof caved in over her head. Pest treatment consultant, Chris Langley, has been studying this species for over 40 years. An average sized colony can eat through seven kilos of wood a day.”

Chris Langley: “I’ve actually had them draw blood when I’ve had contact with the soldiers.” 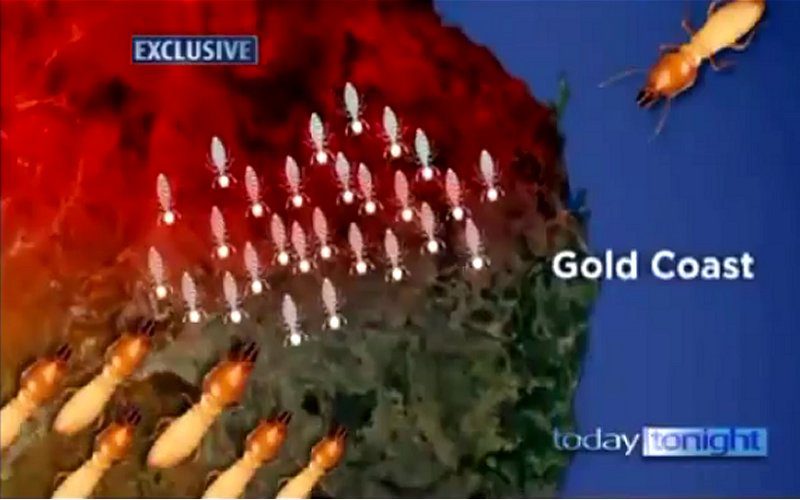 Adam Marshall: “What has scientists so concerned is that the Great Northern Termite normally has one major chink in it’s armour, cold weather and previously couldn’t survive below the Tropic of Capricorn, which cuts across Australia along a line from Rockhampton through to just north of Alice Springs in the Northern Territory and Carnarvon in Western Australia. That was, until last week when a colony was found surviving quite happily on a property on the Gold Coast. The question now is just how far south will they go?”

Chris Langley: “But it appears that they’ve modified their behaviour to meet the climatic conditions down south here.”

Adam Marshall: “Weather it’s global warming or an adaptation by the termite itself, is so far unknown. But now through ’til May, termites of all types are moving into their prime eating and breeding phase. The wetter and warmer the weather, the better.”

Adam Marshall: “Danny Kelly is the pest inspector who found the super termites while carrying out a pre-purchase property inspection on the Gold coast last week.”

Danny Kelly: “The tree stump was basically covered in mud from the termites and when I opened it up, there they were.”

Adam Marshall: “Entomologists confirmed his suspicions. The exact location of this colony is being kept secret by the property owner as they’re trying to sell. Reports from Northern Australia are this termite will stop at nothing to get to timber. Chewing through tractor tyres, eating live trees, electrical cables, metal, even plastic, leather and glass.”

Chris Langley: “They could be considered the most destructive termite species in the world.”

Adam Marshall: “The problem is, homes south of the Tropic of Capricorn, even if they had been treated for termites, the chemical barriers aren’t strong enough to defend against these super termites.”

Danny Kelly: “Homeowners should definitely be alarmed over this.”

Chris Langley: “They need wood and lots of it. Keep your eyes open, have regular inspections in your home and wherever necessary, ask questions if you see something you’re not sure about.”

You can view the entire Today Tonight piece below.