Just over a year ago Pest-Ex were called by a local plumber who expressed major concerns about a rental property that he’d attended due to some issues found within the bathroom.

Initially the tenant suspected water damage, who then reported it to the real estate agency, who then sent out a plumber to investigate, however what was discovered was far worse than anticipated.

When receiving the call, we were informed by the plumber that the bath, filled with water and the tenant had literally fallen part way through the bathroom floor due to structural failure of the flooring.

Needless to say, this was concerning and we attended right away.

The entire house is infested with Termites 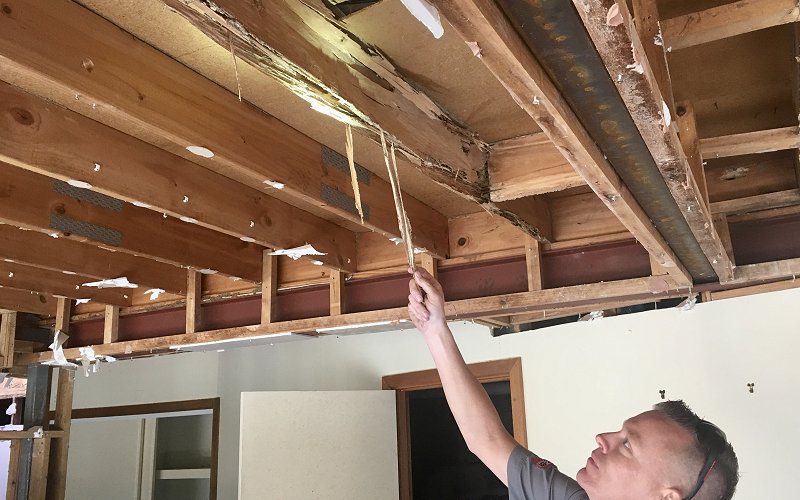 Upon investigation, not only did the house have problems in the bathroom, but everywhere else also. After a quick walk through and investigation it was established that the entire home had a severe Coptotermes infestation.

This often leads homeowners to believe that they don’t require ongoing termite inspections, and that their homes are safe, which isn’t the case. Termites eventually find a way of working around the barrier and eventually into the home.

NOTE – A “physical barrier” is what gets installed as a means of protection during the construction of a new home. It’s a mesh, or metal blanket that limits access. These are entirely different to chemical barriers designed to actually kill off termites.

Informing the owner of the bad news 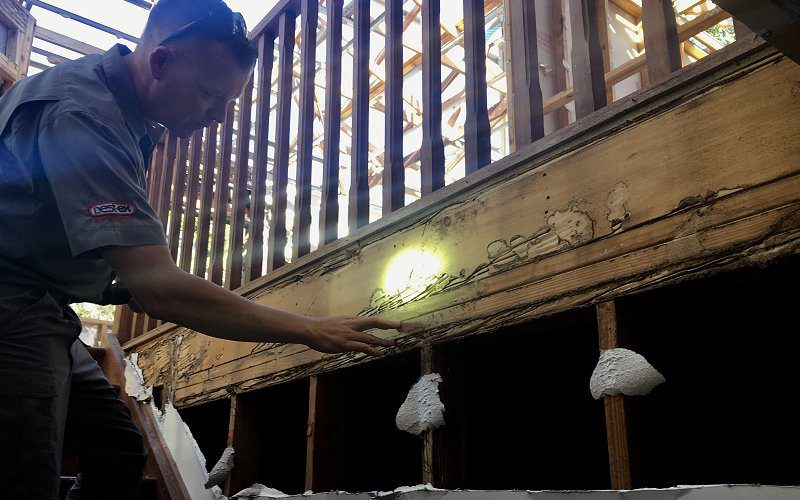 As the property was located on the Gold Coast, and the owner lived in Sydney, we of course had to call to inform her of our findings.

Pest-Ex “Mrs Smith, we’ve had a look through your property and unfortunately we’ve discovered extensive termite damage, quite possibly the worse we’ve ever seen.”

Owner “Are you sure? We’ve had this guy inspect the house every year. He’s a local guy, lives up the road. We found termites underneath the house two years ago. He sprayed them, and he’s been checking it every six months and has said that they never came back.”

Turns out the owner had been using an inexperienced, unlicensed guy, who decided to spray the visible termites with a do-it-yourself type repellent chemical that you get from the local hardware which only kills on direct contact.

We’ve spoken about the risks involved with DIY termite control previously and in most cases, the story never ends well.

What people fail to realise is that spraying termites directly, as you would say ants or cockroaches is completely pointless because it only kills the actual termites you’re spraying – it doesn’t transfer back to the nest, which is what products like Termidor are specifically designed to do.

So you might kill a few hundred, but you have an active nest beneath the house with hundreds of millions of termites in it.

This then means the termites simply come straight back into the property and begin eating away at the structure.

It should be noted that this particular home, was constructed on a sloping block, so the footings are essentially submerged into the soil on one face. The termites simply went over the pre-construction termite barrier and just ate their way through the flooring joists, the timbers, the garage, the wall frames, the studs, the top plates in the roof, everything.

Severe structural damage and a course of action 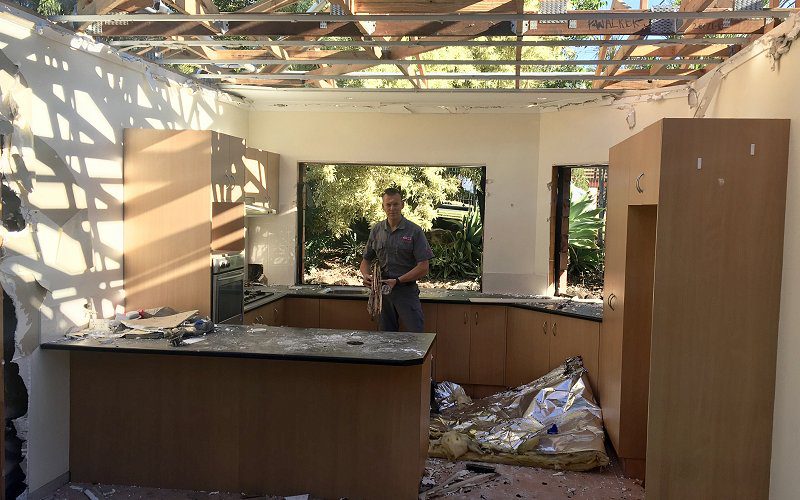 Due to the construction type of the property (because it was on a sloping block) it wasn’t suitable for a chemical barrier, so termite baiting stations were recommended and installed.

We informed the owner that it was likely to take anywhere between two to three months to kill off any active termites including the actual nest itself. During this time, the owner paid to have the tenant relocated, as the severity of the infestation required the property to be vacant.

She also took legal action against the guy who was inspecting the home, which went on for over 12 months, but unfortunately she was ineligible for any type of financial reimbursement as he was unlicensed and uninsured.

Due to the structural damage caused, numerous builders were called in to assess the damage and to determine as to whether or not the house could be repaired.

Once the termites had been eliminated from the property, we worked with the builders and began assessing the damage further by cutting access holes in various walls to determine the extent of the damage.

It was decided that the best course of action was to simply demolish the property and rebuild. Any attempts to rebuild the home, would have resulted in potential collapse as most of the main footing and structures were simply eaten away. Many sections of the flooring and subframe were like paper.

Unfortunately its all too late 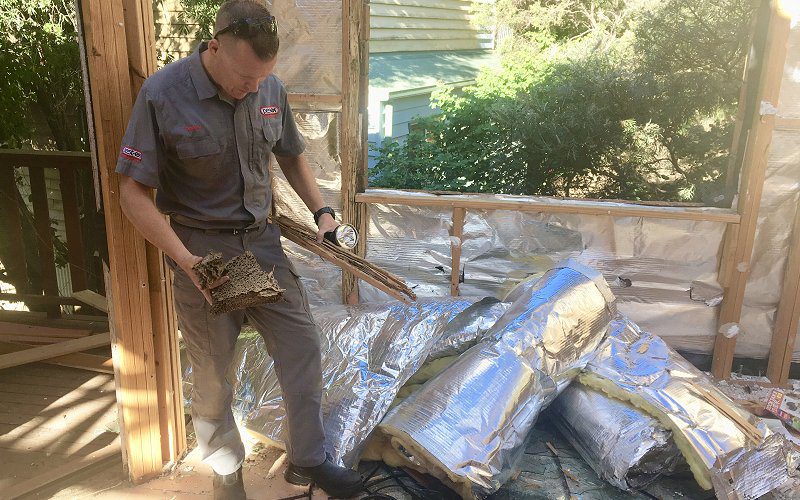 Several builders go about inspecting the property say, “Beyond repair, knock it down. Start again.”, which was obviously difficult to hear for such a new property.

However, the property owner for whatever reason felt that her insurance would cover the damage.

What most homeowners fail to realise is that home insurance doesn’t cover termite damage. In most cases (if not all) this is simply because termite damage causes more damage to homes than floods and fires combined. Infact most leading insurance companies make this clear on their websites.

Here’s a sample taken from a leading insurer’s website – “Home and Contents Insurance does not cover loss or damage caused by insects, vermin, or rodents”.

This left the homeowner in a difficult situation obviously as it meant then having to foot the repair bill herself.

So she then approached the bank for a loan to rebuild the house. The bank said, “Unfortunately we can’t help you”.

Insurance company and the banks refuse to help 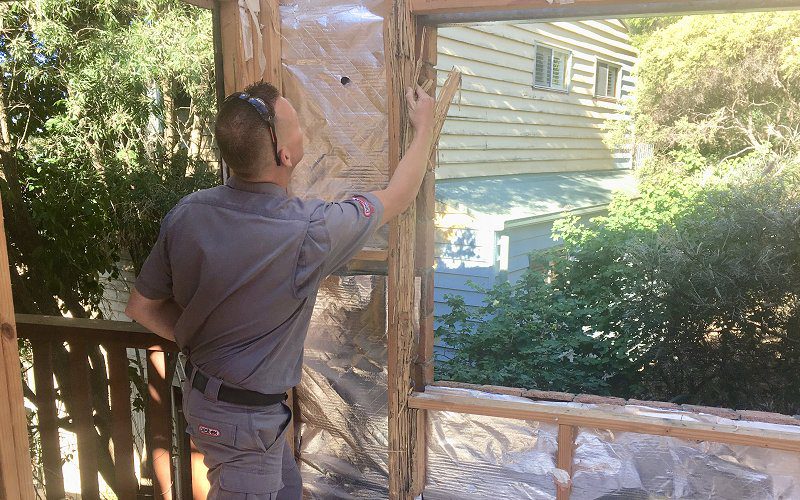 The loan was refused for a number of reasons –

Firstly, the builder’s quote was $300,000 to fix the repairs. The bank would not lend the money to the homeowner to fix the termite damage because the bank’s not going to lend that money when it’s not increasing the value of the house.

Banks will lend money when the properties being renovated in an effort to increase its value. This of course wasn’t the case. This property of course was being rebuilt back to its original condition due to termite damage.

So to summarise the banks wording.

The home can’t be saved and gets demolished 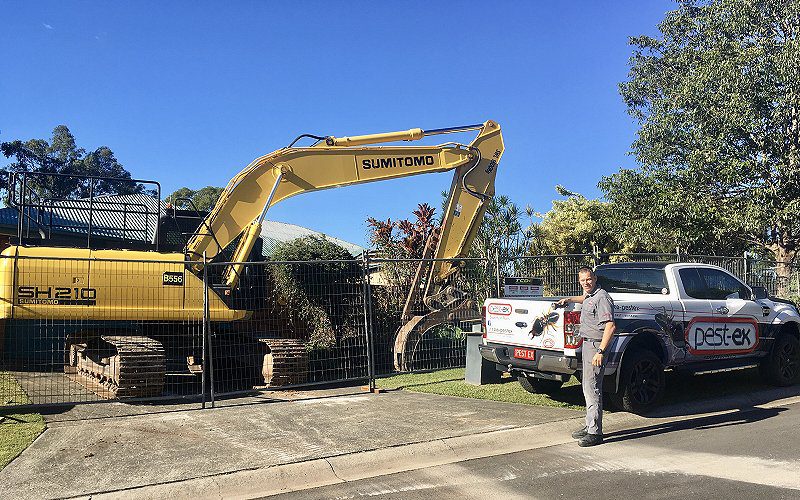 To summarise the outcome, it was eventually decided by the homeowner that the best course of action was to simply bulldoze the house and sell the land.

We drove past there recently and it’s now a bare block. The only thing left is a swimming pool down the back. Unfortunately the owner is still paying off a $300,000 debt

With permission from the homeowner, we wanted to share this story with our readers, because there’s an important number of lessons to be learned here.

Firstly, home insurance does not cover termite damage. Even if your house is new and it’s been constructed with a termite barrier, all these new home termite barriers are a physical termite barrier designed to deter termites from getting in. They’re not like Termidor or a bait system, which is designed to eliminate the colony around the house.

New homes, even if they do have a physical barrier (a mesh blanket), you should still have a chemical barrier installed, or organise regular inspections.

Secondly, you should always only ever be using a licensed professional to perform the inspections. This customers past inspector had no experience or qualifications and this led to the loss of a home and a now outstanding debt of $300,000.

At Pest-Ex we’re licensed by Queensland Health. Our team regularly undergos extensive training and certification which qualifies us to perform termite inspections on all property types, both commercial and domestic.

Ready to work with us?

Don’t let this happen to you.

Cheap termite treatment might save you a few dollars initially, but is it really worth the risk? Termites can cause an incredible amount of structural damage to your home, which insurance won’t cover. It pays to spend the money and do the job right.

Give us a call today.