Termite Treatment On the Gold Coast

Lets face it, the Gold Coast has been home to some of Australia’s worst termite attacks over the last 10 years. Here we show you a “real story” from start to finish how we deal with termite treatments on the Gold Coast. 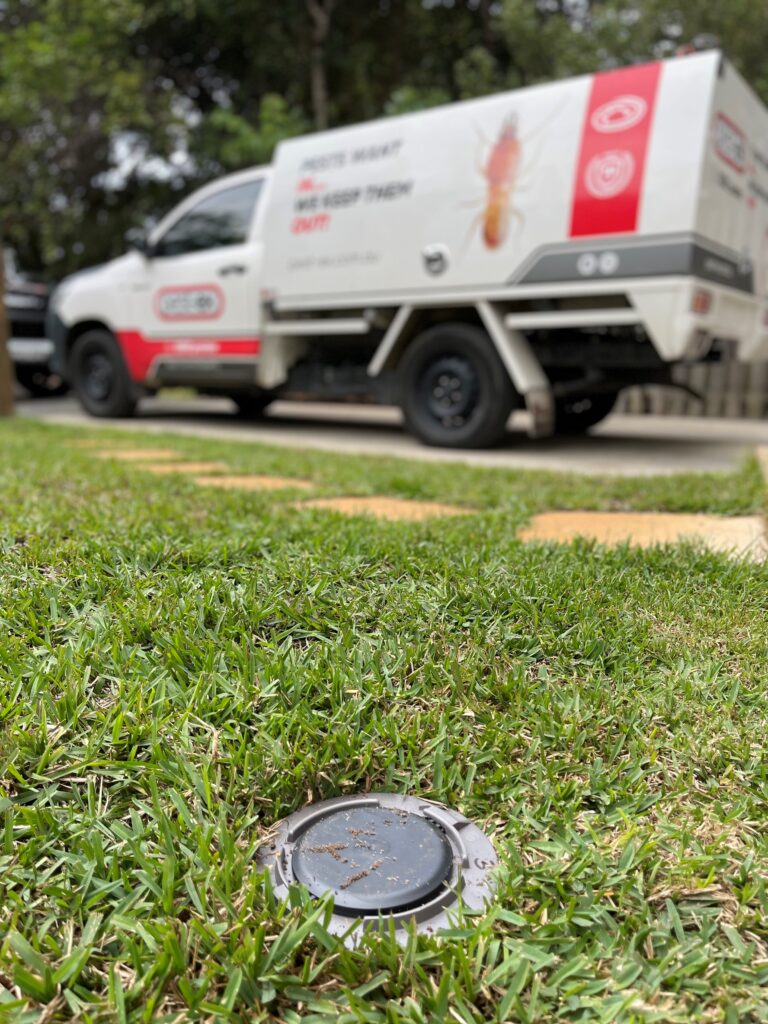 A distraught home owner contacts our office stating he has seen a mud patch appearing on his walls that appears to be growing and growing.

The first thing we ask clients in this situation is “Have you sprayed them with anything” No the homeowner said. This is great for us as we can now assess what type of termites they are. We booked in a free termite site assessment the following day by our technician “Danny”

Danny arrived at the home the following day and confirmed a large termite nest growing by the hour in the upstairs second floor level of the high set Gold Coast home.

The termites were successfully identified as Coptotermes termites (these are Australia’s most aggressive widespread termite) They eat hardwoods and softwoods fast!

The client required termites to be eliminated inside the home as quickly as possible due to the property is about to be leased. The home was suited for a termite baiting system, and in most cases we would bait the internal activity also. The issue with internal baiting is it takes 2-3 months to eliminate the colony, this would have made the property unrentable due to the mud nest growing and dropping dirt daily in the loungeroom.

We recommended we do a termite inspection on the home and if we can find the entry points of where the termites are entering the home we could do a termidor treatment to the entry points. “This would allow termites to pass through inside and out and eliminate all the internal activity within 21 days.

The cost for this specific termite treatment was quoted at $3,460 inc gst and included:

The client accepted our recommendation and the termite inspection started immediately

The termite inspection allowed us to locate 3X termite entry points into the building and the remedial termidor treatment was applied at ground level using direct injection of termidor. This treatment is undetectable to termites and they basically think its just water. As the entry point bases were soaked the termites continued travelling up and down through the entry points 24/7 unknowingly knowing their days are numbered.

The client was provided with a detailed termite report including photos of all findings.

21 days later we returned and confirmed the internal termite treatment was a success! 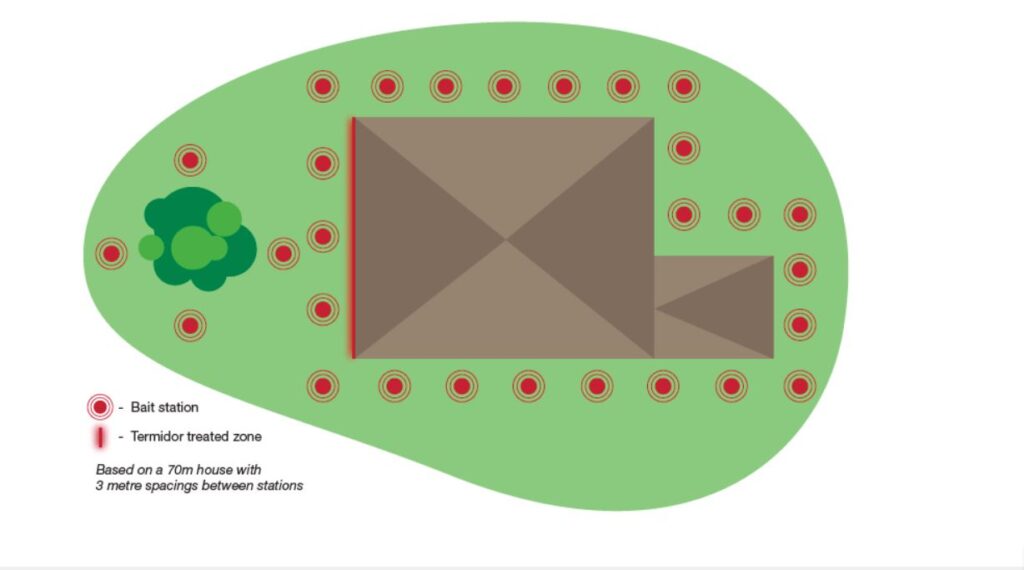 Day 21 after our initial visit we return equipped with the termite baiting system components and all our installation equipment including core drilling machine. We installed 18 in ground termite baits and 2X in concrete core baits under the driveway slab. This allowed a continuous zone around the home containing pre loaded bait in all stations. The new and advanced termite bait systems contain pre-loaded tablets in all stations. 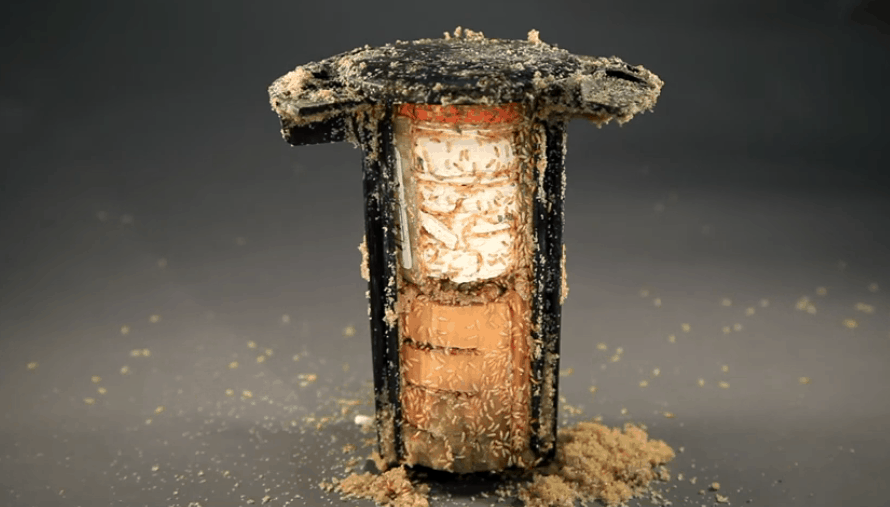 Each station contained enough bait to eliminate an entire termite colony. It was only a matter of time before the termite colony “Still in the grounds” strikes a station.

Over the coming 8 weeks we allow the in ground baits go to work and hopefully the termites strike a station fast!

8 Weeks later we revisit the home and meet the client onsite. He’s happy as all the internal repairs are done and he has good tenants in place. But our job hasn’t finished until the termite colony is eliminated. Termite colony’s can be in excess of millions of termites and the termite queen can lay over 3,000 eggs per day.

We begin checking the in ground baits one by one.

The first 10 stations were all clear and no activity, Then Bang! termite station number #11 was completely consumed by termites. Termites had consumed 2X full bait tablets but still live. 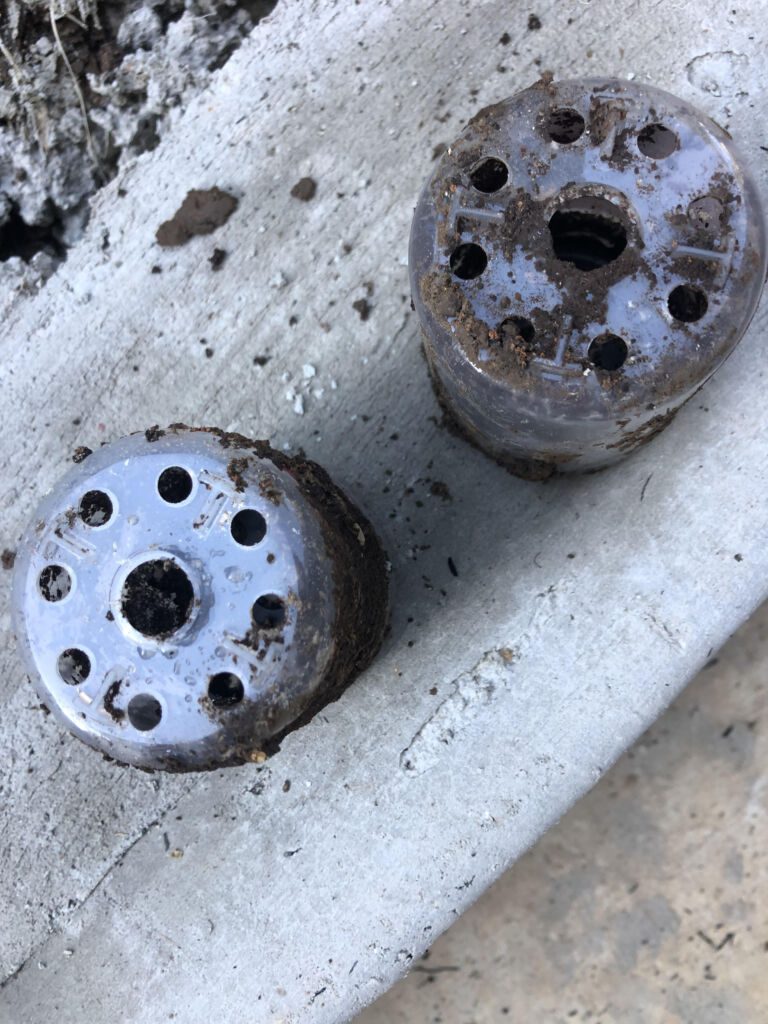 We replaced the internal bait tablets and expected the colony to be eliminated quickly due to the amount of bait consumed.

Termites are eliminated through termite baiting when they molt “shed their exoskeleton” The bait contains a chitin Synthes inhibitor that stops the new exoskeleton growing. The termites feed on the bait as its full of cellulose not knowing their new exoskeleton isn’t growing.

Termites spread the bait to and from the colony day and night over 1-2 months, when the colony molts usually every 3-4 months. Then they cannot function once they molt.

The client was happy the termites were feeding well and the elimination process was under way. “Danny” revisits the home in another 8 weeks to check the live in ground station #11. Termites had consumed about 20% more of the bait that was added and the colony elimination was achieved. Dead termites remained in the station base. The smell of colony elimination due to the decomposing termites was also evident.

It is expected the colony fed for another 2-3 weeks after our last visit and the molting process occurred between visits.

The client wasn’t onsite this time, though “Danny” called by phone to give the good news.

This Gold Coast resident was one happy client, this situation  wasn’t as straight foreword as some as it combined liquid control and also termite baiting. Termite treatments vary on each home and each situation we are always battling a situation that requires skilled knowledge of termites, the type and their control.

To this day we have serviced the home on a 8 weekly basis and there has been no sign or return of termites. The in ground baiting program we installed was a complete success and will provide future termite protection for the home as termites will consume the bait tablets and colony elimination will occur before they enter the home.

If you have a difficult termite problem we would love to hear from you!